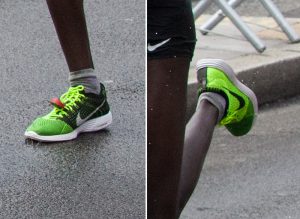 Like most sporting goods, basketball shoes were designed to make life easier for athletes, providing them with more stability and safety when playing sports.

The first sneakers were produced in 1917 by a brand known as Converse All-Star. They became famous three years after when Chuck Taylor, a player from Indiana University, began to use them. Taylor, in conjunction with Converse, later modified the sneakers. Converse bears the name of Taylor and is still manufactured today; it is made with canvas and has a rubber sole. This basketball shoe style has been the best seller in the United States for years, reaching 600 million pairs.

History of Basketball shoes in the 1970s

In the early 70s, Nike created and launched the Nike Blazer MID, a shoe inspired by a model used by basketball player George Gervin of the San Antonio Spurs. The sneakers were also made of canvas and rubber soles. Almost immediately after the production of the Nike Blazer MID, Nike was countered by Converse, which, in the late 1970s, had among its poster boys none other than Larry Bird and Magic Johnson.

History of Basketball shoes in the 1980s

The second major milestone in basketball shoes’ evolution occurred in the early 1980s when Nike launched Air Force I – a tribute to the US presidential plane. The shoe had the technology called “Bruce Kilgore’s air-sole, characterized by an airbag located at the base part of the heel. This shoe also had another innovation, but now in the lining, which was made of leather and with a more adherent sole. It was the first to use this technology that later became known as air. Some players like Mychal Thompson, Michael Cooper, and Jamal Wilkes were among the first to use the Air Force I. Nike has not only consolidated itself as a branded shoe but is also one of the main competitors in the orange ball market.

In 1984, Nike and Michel Jordan produced the Nike Air Jordan line, which is perhaps one of the best “marketing moves in history. These shoes placed Nike as the main star in the basketball market. They were made of leather, a differentiated sole, and impeccable finishes. Their colors were so powerful for the time (red, black, and white) that the NBA even banned the use of sneakers, but that decision did not last long due to the outstanding performances of its poster boy.

Along with the Air Jordan line, Nike also launched several other models for basketball players. Among them were Dunk High, Low Penetrator, and Terminator, found between 1986-1987 and were awarded by university teams like Syracuse, St. John’s, Kentucky, Iowa, Villanova, Michigan, and Georgetown.

Observing the vast success of the Nike Basketball line, other companies also decided to enter the basketball shoe market. The first of these was Adidas, which in 1986 launched the Adidas Attitude, developed especially for the Knicks’ center at the time, Patrick Ewing. In 1989, Reebok launched the Pump, a shoe with an air pump in the heel activated by the players when they pressed a miniature basketball located on the shoe’s top. They have a fine lace.

History of Basketball shoes in the 1990s

The 90s became known as the Golden Age of basketball shoes due to the numerous attempts by brands competing with Air Jordan, such as Reebok, Adidas, and even Converse, to improve their products. The consequence of this was the development of innovative technologies, materials, and designs that culminated in the sales success of these brands. It is in this period that the sneakers signed by other famous players start to fall in the consumers’ taste. Some examples were Charles Barkley, who signed with Nike in 1994, Allen Iverson and Shaquille O’Neil with Reebok, in 1996 and 1992, respectively, and Kobe Bryant with Adidas in 1998. In these shoes, we can see that the materials used are more resistant, the most adherent soles, and with more differentiated designs. Also, cleaning basketball shoes can be such an easy thing to do.

At the end of the ’90s, mainly after Michael Jordan’s second retirement in 1999, the technological advances of the industry became warm, and another trend took the popular taste, the retro, bringing back classic models of the ’70s 80.

History of Basketball shoes in the 2000s

In 2000, Nike excelled, and after more than ten years of developing a new project, it launched the Nike Shox BB4. It possessed four hollow springs and an extremely resistant material that cushioned in the heel region. BB4 had its debut at the feet of Vince Carter, who had been elected the previous year, the freshman of the year, after having had a great season playing for the Toronto Raptors.

From the 2000s onwards, the demand for new technologies increased, and footwear prices increased proportionately.

In 2009, Nike innovated and launched the Zoom Kobe IV inspired by Los Angeles Lakers star Kobe Bryant. The shoe consisted of Flywires, a material developed by Nike that reduced the shoe’s weight without losing the grip and stability needed by the player on the court.

When many thought that this segment’s technologies were already saturated, the Nike Air Mag emerged in 2011. Inspired by the shoes worn by Marty Mc Fly in the film – Back to the future, the Air Mag has several LEDs positioned on both the upper and lower part of the shoe, including the sole; his design was produced faithfully to the model in the film.  One thousand five hundred units were manufactured with prices starting at $ 5000.

Expensive or cheap, from the simplest to the most daring designs and colors, from models signed by famous players or not, the transition of basketball shoes happened in parallel to the transformations passed by the brands that today are leaders in the orange ball market. Today, it is present at the feet of almost all basketball players and athletes around the world, and several types‘ exist. Basketball shoes are also a highly purchased commodity even among non-basketball players as they supply both style and comfort to its user.