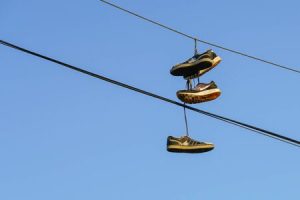 Those that have lived in suburban areas must have spotted the upshot of someone’s shoe tossing – usually, a pair of exercise shoes or trainers are hung on a high position where it is difficult to reach. Well, many might think people do that as an attempt of defacement or to leave an impression in an area; but sometimes it’s for a shoe tossing competition!

What is shoe tossing?

Shoe tossing has a range of names. Generally, it is called boot throwing. The game’s name simply infers what it is all about; it involves throwing shoes or other footwear in specific ways.

The rule of the game is generally based on height, where players throw their shoes and look upward to see how high their shoe gets. Also, there are precise versions of the game whereby players need to get their shoes onto a particular area or within a specific distance from themselves.

Shoe tossing isn’t a widespread sport, so it does not have a global ruleset. Different communities and countries have their own rules of the sport; these rules include specifying the type of footwear players can use or selecting a particular kind of footwear that everyone will use; this way, every player throw an equally-sized shoe.

How and where is it played?

As a sport without global recognition, shoe tossing is done differently across different countries, each having various directives on how and where it is supposed to be played. Here are the most common types and where they are played:

This type of shoe tossing is the regular version of shoe-throwing that is mostly played in the world, with groups from different countries trying to defeat one another and to beat the records for the highest boot throws in the world. This game is guided by a set of international rules that outlines everything from the required shape and size of the shoe to the throwing technique that helps track distances and scores.

This game is very famous in the village of Tilda in South Wales, and it is based on throwing footwear as far and as high as possible.

Wallie wangling is mostly played in Britain, New Zealand, and other European countries, and it is based on throwing Wellington boots as far as it can go across an open space.

Gumboot day is also played in New Zealand. The gumboot day is centered on the gumboot tossing competition and other events related to the gumboot. This game takes place in Taihape, where there’s an official shoe tossing lane to allow players to participate all year round. Also read about cowboy boots

What’s the point of shoe tossing?

Shoe tossing is a recreational sport that focuses more on having fun and enjoying a friendly, risk-free game; it doesn’t require physical contact or harm to any player. The shoe tossing game is safer than caber toss and ax-throwing and easily accessible as shoes and boots are everywhere. It takes a little time to set up a shoe tossing competition.

Another beautiful thing about this game is that it focuses on measurement rather than a goal location or course as in soccer and golf, respectively. It can take place in an open field or space.

Shoe tossing is an excellent way to exercise since many people don’t regularly throw except if they’re actively involved in a regular sport.  While getting fresh air from outside, you also strengthen your muscles more than people who don’t play the game. Shoe tossing serves as an alternative to weight-based exercises. Engaging in golf competitions is also an excellent way to exercise your muscles.

Is all shoe tossing for sport?

Shoe tossing has many connotations, so it is not usually about a game. Sometimes when we see shoes hanging from hard-to-reach places, they’re mostly left there as bragging rights, or by teenagers having fun in the streets or as a result of bullying. It might even be that someone’s shoe is worn out, and they want to keep them in a safer place than throwing them away.

Even in terms of contests, not all the shoes up in the wires are meant for competitions; some areas in the United Kingdom have strange games as part of charity and fundraising events that serve as fun to many, including the teenagers.

How can I play shoe tossing?

The game of boot throwing is relatively easy. If you want to try shoe tossing simply, get a wide-open space or field. You can do this alone as a form of exercise or host a fun and friendly informal contest among family and friends. Not much set up is needed; all that is required is spare boots and a measuring tape. Even formal competitions don’t need many materials; only chalk and some cones to mark specific zones are needed.

However, if you want to take part in a proper shoe tossing competition, many international groups arrange boots throwing matches for people and gather players. Famous among these groups is the Bootthrower’s House Throwers’ Club. This club keeps a timetable and schedule of all submitted shoe tossing events.

Shoe tossing is a friendly game that isn’t as dangerous as caber tossing, ax throwing, and other games involving sharp, heavy objects. But you still have to be careful when playing a shoe tossing game, always aim in the right direction and stay focused; else you can accidentally hit someone, damage objects, or break nearby windows.

It is important to note that tossing shoes are considered an insult in some traditions; avoid playing the game in public places like beaches and parks where people from different countries are found so that you are not misunderstood. If you’re taking part in a proper contest, adhere to the rules and avoid cheating, as this offense is often treated seriously.