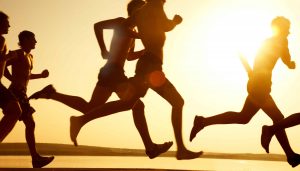 America’s a nation of runners.

That’s a lot of pairs of legs getting out and about, enjoying the many health benefits that running offers! Parks, beaches, national parks, and running tracks are always full of active individuals on a run.

However, great as it is, running solo has its pitfalls. Among other things, it can be lonely, tough to stay motivated, and harder to improve. Enter running groups.

A running group offers a great alternative to solo running. Want to find out why?

Running groups are becoming increasingly popular. And for good reason. Check out these 8 key reasons you should consider joining one.

It’s easy to get stuck running the same routes over and over again.

You find a favored spot and stick to it, right? Maybe you alter course every now and again to run longer or shorter distances. But otherwise, it’s all too easy to fall into a routine.

Now, that’s not necessarily bad. However, there are always new routes to find out there! Running groups will know all the best ones. You can guarantee they’ve been there and done it before. It’s a great opportunity to learn all the best running spots in your neighborhood and the wider area.

2. Run With Other People

This might sound obvious. However, running groups mean you run with a bunch of other people!

Why’s that worth mentioning?

Well, there are a host of benefits to running with others. A major bonus is the potential to make new friends. Running’s great, but doing it alone can get, well, lonely! In fact, loneliness is a big issue in society (learn more about it here). Joining a running group can help.

There’s nothing like a group of motivated people to help you train harder.

Join a running group and you’ll be pushing yourself further than ever before. It can be exactly the push that you need.

We all experience lulls in our motivation levels. That’s totally normal. Having people there for encouragement can help you get through it. They won’t let you skip that run, or stay in bed. They’ll be busy persuading you to join them!

Have you heard of Ulysses before? He’s a famous name in Greek mythology.

Ulysses tied himself to the mast of his ship, and told his crew to fill their ears with beeswax, in order to escape the lure of the Siren’s singing, and get home safely. By tying himself to the mast, he removed the need for willpower; he had no choice but to go through with his task of getting home.

The term ‘Ulysses pact’ describes the same process. Here, you force yourself to commit to a task such as running rigorously by making yourself accountable in some way.

Attending a running group is a good example. It effectively ties you to the mast. No excuses. You’ve told your pals you’ll be there. There’s no excuse not to get out running.

The more you run, the fitter you get.

And in a running group, running’s one thing you can guarantee you’ll be doing lots of!

Having other people to motivate you is a sure fire way of helping you break personal barriers and goals. You’ll be fitter, quicker, smashing personal bests, and helping others do the same, in no time.

There might be certain aspects of running that you don’t understand.

Adjustments to technique, the right footwear especially if you suffer from foot ailments such as achilles tendonitis or plantar fasciitis or a sprained ankle, the best diet to adopt, what to wear, where to go…It could be anything. There may be minor or major gaps in your running knowledge. A running group can help with that.

Remember, these guys live to run. Sure, there’s bound to be people of different standards. And that’s awesome. But you can guarantee a lot of knowledge around the group. Everyone has something to offer. After all, you might be running alongside doctors, dieticians, and trained athletes.

The access to running information and insight is second to none.

Your other non-running friends are different.

They might not understand your obsession with compression socks, speed around the track, or the new routes you’ve found. Runnings groups will.

You’ll be around your own people! Everyone’s a committed runner, a growing enthusiast, or a willing learner.

However, at certain times of the year, they’re also dark and gloomy. Some people may be unsure about running around the neighborhood in such periods. There might be someone up to no good in the area. Of course, that can be true at all times.

Running in a group means there’s safety in numbers. A big group is far less likely to experience an issue compared to a solitary individual.

Time to Get Running

There you have it: 8 reasons you should join a running group right away.

Every day, millions of Americans enjoy the benefits of running. More and more of us are feeling the benefits that running has to offer.

However, there comes a point where solo running might not be enough. Maybe your motivation levels are dipping, it’s getting dark at night, or you’ve plateaued in your progression. Whatever the matter, running groups may solve the problem.

As we’ve seen, there are a whole plethora of incentives for joining a group of running enthusiasts!

Hopefully, we’ve convinced you of the benefits. Do you love running and want to try something different? Why not give a running group a shot? We’re willing to bet you’ll love it!

Did you enjoy this piece? Do you need to find your next pair of running shoes? Be sure to contact us for footwear recommendations and reviews!