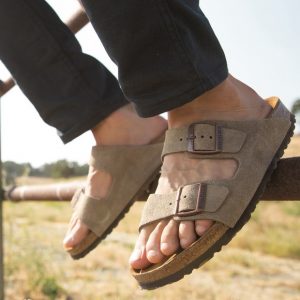 Birkenstock is a famous German footwear brand started by a shoemaker named Johann Adam Birkenstock in a small Hessian village, Langen-Bergheim, in 1774.

This footwear was later developed by Johann’s great-grandson Konrad Birkenstock who made the first contoured insole in his shoes and started two shoe shops in Frankfurt. In the following years, Johann Adam Birkenstock’s successors developed this insert (contoured insole) into a shoe, thus producing the Birkenstock sandal prototype. After World War II, the Birkenstock brand sandals became very popular among soldiers because of the orthopedic support each product had, and in 1964 Karl Birkenstock released his first athletic sandal with flexible feet called Madrid. These sandals immediately became popular, especially among gymnasts.

Reasons why Birkenstock is so famous and highly sought after

Below are some of the reasons why Birkenstock is notable.

It is made from the best materials

Birkenstock sandals are made from quality natural materials such as cork (a material made from oak bark), latex, and jute (fiber from the plant’s bark).

Also, there is jute/straw material found in Birkenstock sandals. The Jute material provides a sturdy structure at the top and bottom of the cork and latex. To not only the base but Birkenstock also pays attention to the quality of the material found on the top of the sandals. This comfortable sandal uses the best leather and synthetic materials to make it look more beautiful. Some examples of materials used in the production of Birkenstock include natural leather, velvet, wool, felt, etc. Your Birkenstock deserves to be stored properly when not in use.

Birkenstock has the best footbed

These comfortable Birkenstock sandals are also popular because they have the best footbeds. The footbed owned by Birkenstock has several advantages, such as the remaining space for the toes to move more naturally and balance, so they don’t feel too cramped.

The footbed contours found on Birkenstock sandals are designed to distribute body weight evenly, to give you the best posture while standing or walking.

The footbed of Birkenstock is also very flexible and very comfortable to use; it is so light that even though it looks thick, you can use it all day long without fear of aches.

The footbed material is very durable, so even though Birkenstock sandals’ price is relatively high, you can wear them for years.

It is popular among world celebrities

World-class celebrities wear Birkenstock sandals, too, so you can also style yourself in good quality sandals like those worn by Heidi Klum, Ashton Kutcher, Ashley Olsen, and many other celebrities.

Although traditional Birkenstock sandals had never left the scene, they had been out only for a few years. Birkenstock is still a current trend.

Birkenstock flatbed sandals often steal the show when summer arrives. The design is cozy and unique with a 90s cut. It is one of the best sellers in the world’s top fashion houses. This condition is quite astonishing, considering that the most admired footwear for women is usually high heels. In addition to this, this type of sandal used to be looked down on because parents more often used it to the point that it was referred to as ugly sandal. However, the situation changed when Vogue magazine praised the sandals, which are not only comfortable on the feet but can also be combined with the clothes worn.

Several models in the world that have been seen wearing these sandals include Naomi Watts, Ashley Olsen, Mary-Kate, and Miranda Kerr.

Now is the time to shine in comfort in 2021. Some fashionistas have used Birkenstock even in winter, combined with monochromatic looks or the very darling suit. Your choice will, of course, depend on your universal style. Also, purchase a Birkenstock that fits you well.

Simple yet classy, ​​Birkenstock sets the standard for comfort, quality, and functionality, starting with selecting high-quality and environmentally friendly materials, namely cork, latex, and hemp. With headquarters production and logistics in Germany, Birkenstock is sold in about 90 countries worldwide.