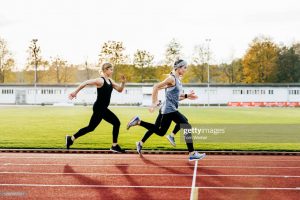 Whether you are an ardent lover of athletics that involves track and field events, you surely need to know some basics about the track. Many runners run without actually knowing the laps they have covered. Even with this, running on a standardized track is fascinating and a perfect place for wannabe athletes to start training because of the controlled environment. It is easy to run because the distances are already measured for you. However, the most interesting things about a track are the mysteries hidden in plain sight. The mathematics behind the design and construction of the running surface itself is quite fascinating. What seems to be simple is now anything but simple. You will see many people asking the common question, “How many laps are in a mile?”.

For this reason in mind, this guide will answer some of the common questions relating to track and field. Let’s jump in!

How Many Laps Around a Track is a Mile?

Now to the popular question, you want to know how far you have run, then let’s get this down!

First and foremost, whatever the track you are running on, you need to know the measurement or the length of the track or lane rather, whether in imperial or metric measurement. This is because different lanes on the track have their measurement. The IAAF sets the maximum number of lanes to 9. Each of these lanes has different distances, which increases with the lane number. Lane 1, which is always the standard for most Olympic track, is about 400 meters. Since a mile is equivalent to 1600 meters, you need to run 4 laps around a track to reach a mile. In the same vein, 2 laps are equivalent to 800 meters and so on.

However, it should be noted that if you are running on other lanes aside from lane 1, you are more likely to reach a mile faster. This is because of the increase in distances by 40 or 50 meters as the lane number increases or the lane’s curve increases. Regardless of the lane, you might be running on; you should be able to know the number of laps you have covered at any given time. Here are some mathematical expressions to help you.

Now, how many miles are 10 laps around a track? You are correct; that is just 2 and a half miles in imperial measurement or 4000 meters in metric measurement!

How are the Distances of each Lane Measured?

As stated earlier, on the track field, the lanes have different numbers, and why is that? Remember that the track is like a circle, so it is subjected to some mathematical formulas. In geometry, the perimeter of the circumference of a circle is 2πr. Also, on the track, there are two straightways you have to run before encountering the curve. A quick one, the straight-ways are 84.39 meters according to IAAF Standards. So, a standardized track is a circle divided into halves with two straight-aways that join them together. The total distance for a track will be our derived mathematical formula, which is equal to 2πr + 2s, in which “s” is the straight-way.

Furthermore, each lane is 1.22 meters apart according to IAAF specifications. Therefore, other distances around the track in lane 2 would be 407.67 meters, lane 3 as 415.33 meters, and so on

Are Tracks the Same?

There are different tracks out there that are allowed by the IAAF. Some tracks appear narrow, having long straights and shorter curves. Some might even have wider dimensions. The variation could be due to the space available, the site, area, and the field’s shape generally.

According to the IAAF standards, the lane’s radius used as standard is 36.5 meters, plus the straightways being 84.39 meters. However, there can still be some non-standard adjustable dimensions. In most cases, the curves are constructed by making the arcs with different radii. These tracks are mostly seen in facilities focused on other sports such as football, rugby, etc.

Simple Etiquette You Should Follow When On The Track

A track could become a place of confusion in no time if you don’t follow some simple manners regarding running on the tracks. Here are some!

Lane 1 is often used by the fastest runners. Assuming you are just trying to pass the time by running, warming up, jogging, and so on, it is recommended you move to other lanes to avoid collision. You can work out in lanes 2 to 8. Also, in some places, lanes 1 to 4 are not allowed for public use. They are reserved to be in good condition for their main athletes.

For your safety and to avoid collisions, you should run anti-clockwise. This is how most runners do when running on the track. At times, some public travels have specific days for specific directions; you could do well to ask

Running on a track surface is one way to improve your performance. However, to know this, you need to know or calculate the distance you have covered. Remember that a mile run is equal to running four laps around a track. Also, always adhere to the rules guiding running on a standard track. Have a nice time!