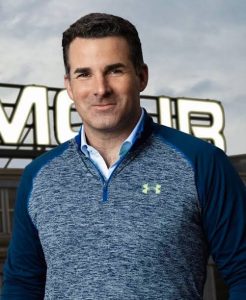 About 25 years ago, it was hard to imagine putting exercise and comfort in the same sentence. Taking part in a sport or training was one thing; wanting to go on when the sweat starts appearing was another, not to mention those that get sweaty very quickly.

When it comes to picking suitable footwear for sports, features like quality, weight, cushioning, flexibility, and design are considered. Unlike most popular shoe brands, Under-Armour started by solving the sweat-discomfort problem that comes with exercising and sports activities to creating fashionable, comfortable sports footwear.

Although under-armour shoes are not as popular as the likes of Nike and Adidas, the running shoes produced by this brand are becoming popular by the day.

In this article, you will discover all there is about under-armor shoes, the company’s history, its founder, how and why it was founded, and the features that make their footwear suitable for the sport. Let’s delve in!

Under-Armour, Inc. is an American company that produces sports apparatus, footwear, sports, and casual clothing. Kevin A. Plank founded it on September 25, 1996. Its headquarters are located in Baltimore, Maryland. It also owns offices in Amsterdam, New York City, Hong Kong, London, Mexico City, San Francisco, Munich, Portland, Shanghai, Toronto, Houston, Seoul, Santiago, Paris, and Pittsburgh. After it was featured in “Any given Sunday, The Replacements, and the Warner Brothers films,” the brand’s growth heightened.

In 1997, Under-Armour sold over 7500 products. They also had twelve college football teams and ten nationals’ football league (NFL) putting on their clothing. In 1998, the company became a supplier to the National football league, Europe. By the end of 2001, Under-Armour had employed over 59 workers and sold over 25 million dollars.

In 2002, Under-Armour started to focus on the women’s clothing line. The company has continued to make progress and is becoming more recognized.

Under Armour wasn’t launched to produce sports clothing for athletes only but also workers and persons all over the world. Also, see the history of wrestling shoes

Kevin A. Plank is an American businessman and philanthropist. He is the founder and executive of Under-Amour.

Kevin Plank attended the University of Maryland and graduated in 1996 with a bachelor’s degree in business administration. While at the University of Maryland, Kevin launched a business; he started selling roses on Valentine’s Day. Kevin earned a sum of $3000, which he utilized to initiate Under-Armour. Initially, Kevin started the business in Washington, D.C, at his grandmother’s basement, and later moved to Baltimore, Maryland (where he is now based). He sold one of the first models of the T-shirt from his car.

Why the name “Under Armour.”

You might have noticed that although Under Armour Inc. is an American company, Kevin Plank opted for the British spelling of Armor (Armour).

At first, he chose to name the company “Heart,” but then he couldn’t get a trademark for it, so he opted for ”Body Armor” but still experienced difficulties in adding an emblem to the name.

After a conversation with his brother Bill, who mistakenly called it “Under Armor,” the name, Under Armor, sounded perfect. However, because a toll-free number wasn’t available for “Under Armor,” he decided to choose “Under Armour.”

The logo that represented the company was designed to be quite simple, combining the “U” in the under and the “A” in the Armour; it was designed in such a way that it only had curved edges and sharp points representing how comfortable it is for users as well as the toughness of the shoe.

Footwear was not one of the first products developed by the company, but Kevin Plank decided to move into the footwear market. He developed the first Under-Armour football cleats.

In 2009, he introduced the Under-Armour running shoes for both men and women with different unique features. The prominent feature included directional cushioning engineering and cartilage that aided stability. Some of the shoes released include UA Illusion, UA Mirage, UA Mako, and UA Apparition. In 2011, Plank developed and introduced basketball shoes into the market; this enabled it to compete with Adidas and Nike in shoes of this category.

Footwear produced by Under-Amour served the purpose of making the users feel light while enjoying style and comfort.

What are Under Armour Shoes Made Of?

Under Armour footwear is designed to keep your feet dry, leaving you with a relaxed feeling. They are also involved in creating sustainable shoes to contribute to the planet’s safety and ecosystem; they achieve this by using virtual designs and prototypes to eliminate pre-production waste.

Creating quality and durable shoes reduces the need to discard them, thereby reducing environmental hazards. See how these eco-friendly shoes are made.

Although they are still new to the world of footwear production, they aim at taking advantage of technology and advanced material production techniques and reducing waste production.

Most materials used in producing under Armour shoes and products are obtained from 80% Polyester (both recycles and virgin polyester). Also, the footwear soles are manufactured from rubber, which makes the shoe quite flexible and comfortable. Different types of under armour shoes exists.

Features of the Under Armour shoes

Under-Armour shoes are called smart shoes because they are technologically innovative footwear. The following are the features that make Under-Armour different from the rest types of shoes:

When looking out to purchase shoes, it is best to define the specific purpose you want the shoe to serve.

Due to the quality, features, benefits, and competitive nature of Under-Armour footwear, it is expensive. However, under-armour uses technology as its main selling advantage. It also focuses more on solving problems and making its customers very comfortable and satisfied.